Boston was one of America’s first cities founded not long after the Pilgrims landed at Plymouth rock. Downtown Boston started forming in 1628 and is the headquarters for much of the city, county, state, and federal facilities. Everywhere you turn in Boston is a location of one of our nation’s founding events, from the Boston Tea Party, the American Revolution, to the famous Paul Revere ride to warn that the “red coats are coming!” If we were to jump up a few hundred years in time Boston’s story is still one of fascination and wonder, and one worth knowing.

The city that we know today really started taking shape back in the 1970s when the city overcame an economic downturn. During that time multiple financial institutions took advantage of the ease of entering the market and downtown Boston began attracting mutual fund businesses and became a world leader in the industry. At this same time hospitals started popping up all over the area such as our world-famous Massachusetts General Hospital. Plus, this era brought in hordes of intellectuals to Harvard, MIT, Boston University, and Boston College who fell in love with the city and because of permanent residents upon graduation.

The 80s Were Something Else

In the 1980s Boston, a developer group by the name of Corcoran-Mullins-Jennison came in and helped the city revitalize Boston’s deteriorating Columbia Point housing complexes. Under the private developer group, the area became known as Harbor Point Apartments and was the nation’s first federal housing project for mixed-income housing. This reinvention of the area won many awards to include the FIABCI Award for International Excellence and the Rudy Bruner Award for Urban Excellence.

As we hit the turn of the century public transit was the name of the game in Boston. Nicknamed the Big Dig the city of Boston inserted a new Tunnel called the Central Artery. Part of the reason it was called the Big Dig is it took decades to complete. The project created bypasses for east and westbound traffic to alleviate congestion in the city and was approved by 1980s Massachusetts governor Michael Dukakis. The project also produced the Zakim Bunker Hill Bridge and freed up more than 70 acres for public parks right in the city.

Downtown Boston over recent years has seen many of its world-renowned institutions leave do to a number of situations. The Boston Globe was acquired by The New York Times and lost its headquarters and publishing houses. Plus, the 100+-year-old Jordan Marsh store was bought up by Macy’s, and many of the areas banks were bought out such as Shawmut Bank, Bay Bank, Bank of New England and the Bank of Boston. 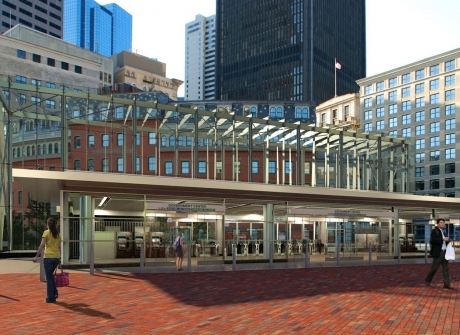 In recent days Downtown Boston Business Improvement District (DBBID) has said they will give a $90 million facelift to the Government Center station. The project will help the station become more modern and user friendly to those who frequent its services. The entire area under DBBID has put more than $2.4 billion into projects in just the last decade. Those funds were used for residential homes, restaurants, college facilities, and entertainment projects.