Posted in Atlanta Falcons on April 22 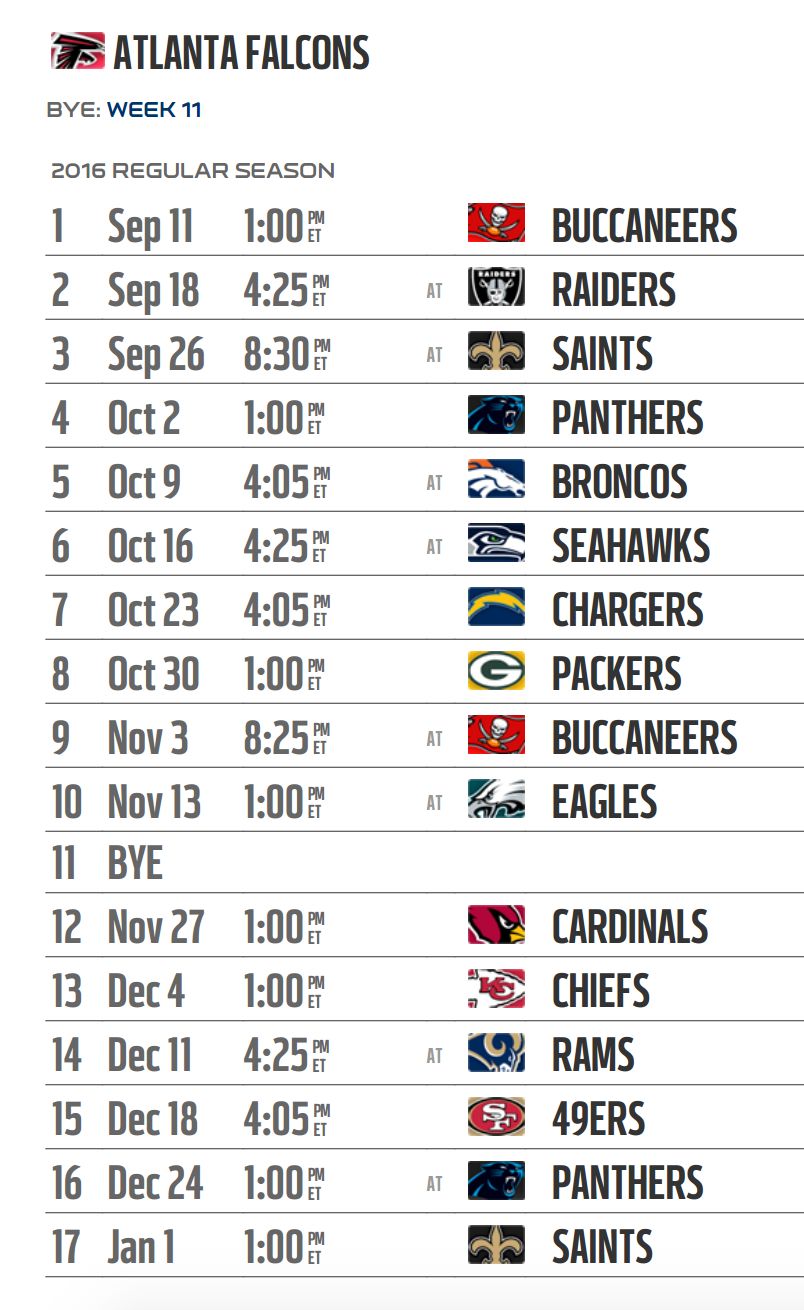 Dan Quinn and the Atlanta Falcons will get their fill of the NFC East.

People always look for aspects that stick out when the NFL releases the schedule for its 32 teams, and that’s the big take away for the Falcons in 2015.

The first three games of the season are against the NFC East – the Philadelphia Eagles, New York Giants and Dallas Cowboys. The Eagles game is the opener of Monday Night Football.

Since Atlanta doesn’t play Quinn’s former team, the Seattle Seahawks, that’s the most intriguing aspect of the schedule. 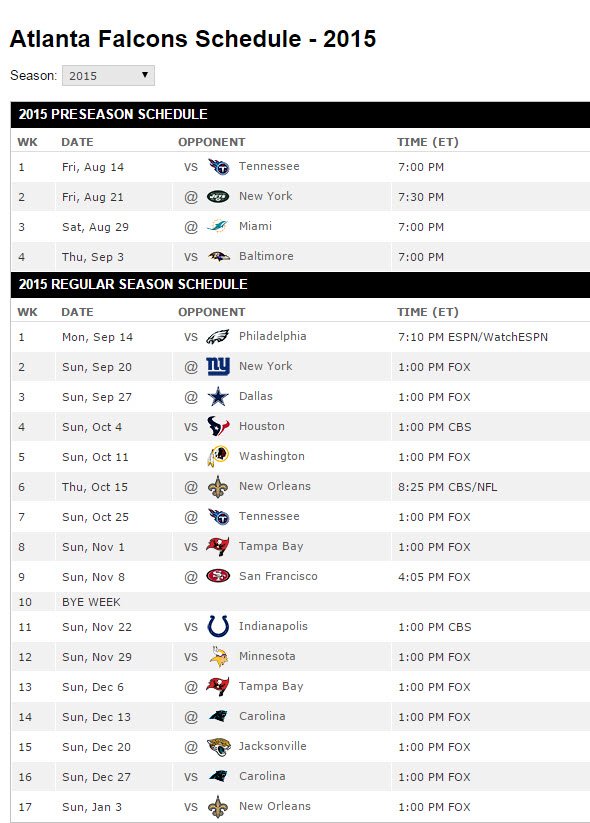 The Falcons also play the AFC South, so fans will get a close look at Andrew Luck and the Indianapolis Colts at home after the Week 10 bye.

The other aspect that stands out is the three straight road games from Week 13-15. In that stretch, Atlanta plays the division rivals Tampa Bay and Carolina, and then Jacksonville (a winnable game, for sure).

The Falcons close out the schedule with two home games against division rivals Carolina and New Orleans – talk about a strong finish. Given how last season ended, those two games could be very important for the division and playoffs.

It’s also the easiest schedule in the NFL, at least according to strength of schedule based on opponents’ records from last season.

How the season goes is directly tied to the defense and if it’s any better than the last few seasons. To be honest, it can’t get much worse.

Enter Quinn and his defensive mind and philosophy. He was the defensive coordinator of the Seahawks the last few seasons, two of which ended with a Super Bowl win and another where they should have.

If Quinn can build a similar defense to the one he had in Seattle with the Falcons, everyone knows Atlanta can score points and lots of them. Led by quarterback Matt Ryan, all that’s been missing is a defense. Any semblance of a defense. That offense doesn’t need to be the Seahawks or the 1985 Chicago Bears. The Falcons just need a defense that makes key stops, gets pressure on the quarterback and creates turnovers.

Basically a defense that doesn’t get in the way or hold the defense back.

If that can happen, and that’s the expectation in Atlanta now that Quinn is the head coach, the playoffs are real possibility. Even the division can’t be ruled out – the NFC South isn’t exactly the NFC West in terms of great teams. That means the window is larger to break through.

While some fans have unrealistic expectations or hopes at this point, yours aren’t.

As is the case with the NFL, it’s all about the defense.

Do the Falcons finally have one?

You’ll find out right away with three great offensive teams to open the season.

One thing that sets Atlanta apart from other large metropolitan areas is our superior dedication to our sport teams. Sure, that might come across as bias since I live here but the fact I have proof. Yes, that’s right, I have proof that Atlanta not only loves our sports teams but we have fans dedicated enough to report on the latest news and rumors involving our beloved Atlanta Hawks on some of the best fan blogs in the country. So you’ll understand if I admit that it’s quite a daunting task to determine which Atlanta Hawks fan blogs come out as No. One. So instead of ranking which blog is number one as an alternative I’m going to give you a list of the top overall blogs, and you can go in and choose which one you think is the best.

Proclaiming itself as the top home for quality news, rumors, stats, scores and analytics on everything involving the Atlanta Hawks, this fan blog definitely ranks near the top of the list. All the news is all the typical straight in your face reporting you would expect from a fan dedicated to their team. This blog is part of the SB Nation, which has dedicated blogs to many teams throughout the country, and has a dedicated space just for fans to post their latest rants. Next to each fanpost is the number of comments allowing you to easily identify which topic should require your two cents.

Another great blog is HawksHoop.com, which has been writing all about the latest Hawk stories, stats, trade rumors and more. This blog is affiliated with ESPN’s TrueHoop Network that gives a place for NBA fans to voice their opinions on everything involving the great game of Basketball. This specific blog has a deep intensity that is shown in the works of bloggers Bo Churney, Buddy Grizzard and Chris Barnewall in particular. This is one you’ll definitely want to check out because it cuts through all the noise and fast rotation of boring fluff some blogs get caught up on.

Breaking down the latest news and rumors from everything going on with the Hawk’s season is another great blog called SoaringDownSouth.com. Associated with Sports Illustrated’s Fansided blog network, this website offers an entertaining side to all things happening in both the NBA and the Atlanta Hawks. This blog is unique in that it makes salary information readily available so you can rant on if a particular player is playing up to the standard you would expect based on the amount of money they make. Though this website has dedicated staff of writers, they’re always looking for fans who want to write about the Hawks passion that burns brightly in their beating chests. If that sounds like you, than you’ll want to get in contact with them.