How the Downtown Dallas Skyline Got Its Shape

How the Downtown Dallas Skyline Got Its Shape

To trace the history of the downtown Dallas skyline, you don’t have to go back very far.

Just as J.R. Ewing was chasing his fortunes on TV in the late 1970s, the real-life Dallas was experiencing a boom of its own. The banking and tech sectors in Dallas had taken off, driving a frenzy of new development throughout the area.

Here’s how the Dallas skyline took its shape: 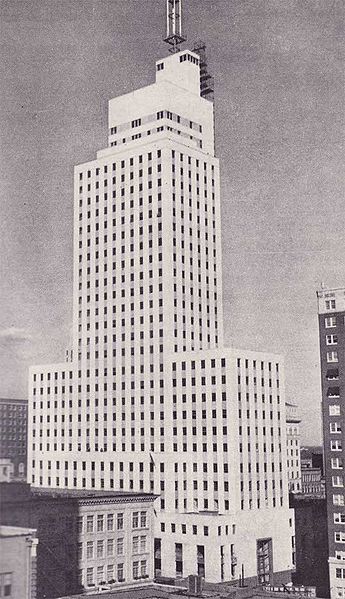 The Mercantile National Bank Building before its opening in 1942 (Photo courtesy).

Long before the days of Texas Instruments and RadioShack, Dallas was primarily an oil and banking town. The oldest building in the Dallas skyline that’s still noticeable today is the 31-story Mercantile National Bank Building.

It was built in 1942, the only skyscraper built in the United States during World War II. It housed a number of corporate tenants, including the Dallas Texans NFL team. The savings and loan crisis of the late 1980s forced most tenants out, and it was repurposed as an apartment complex.

Republic tried again to reclaim the title by building a second tower in the 1960s, but FAA regulations prevented them from building it to its planned height and recapturing the title. The towers are still prominent in the Dallas skyline today, providing mixed-use office and residential space. 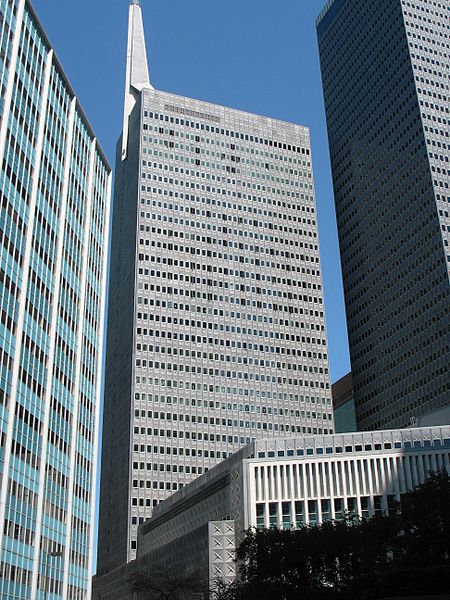 First National Bank Tower (now Elm Place) closed out the decade as the city’s tallest skyscraper, built with more than eight acres of glass and white marble imported from Greece on its facade. Facing low occupancy, the Elm Place’s owners closed it in 2010 and it is now under redevelopment. 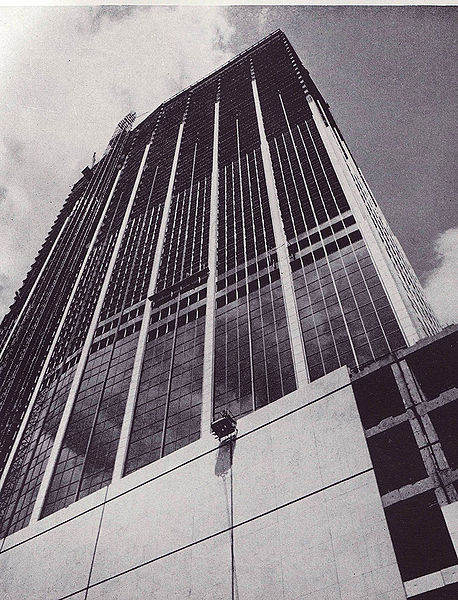 Going back to our “Dallas” reference in the beginning of this entry, fans of the TV show might recognize Renaissance Tower as the fictional home to Ewing Oil. The tower also gained notoriety in 1981, when a man wearing a Spider Man suit and suction cups on his hands scaled the outside of the building.

Today, Renaissance Tower is still the second-tallest in Dallas and the 25th tallest in the country.

Toward the end of the decade, Dallas added one of the most unique features of its skyline. Reunion Tower was opened in 1978, an observation tower that still stands as the second-tallest in Texas.

Notably, the tower made a brief cameo in the background of the film “RoboCop,” even though the story was set in Detroit.

Bank of America Plaza and the 80s Building Boom

Downtown high rise construction picked up steam in the 1980s, as 16 of our 28 downtown skyscrapers were built during the decade.

Our skyline added some unique buildings. That includes the KPMG Centre (1980), recognizable for its sloping glass walls, and Fountain Place (1986), built as a large, multi-faceted glass prism with 172 dancing fountains at its base.

Other buildings of note that come up during that time were the Comerica Bank Tower and JPMorgan Chase Tower, the third and fourth-tallest buildings in the city, respectively. 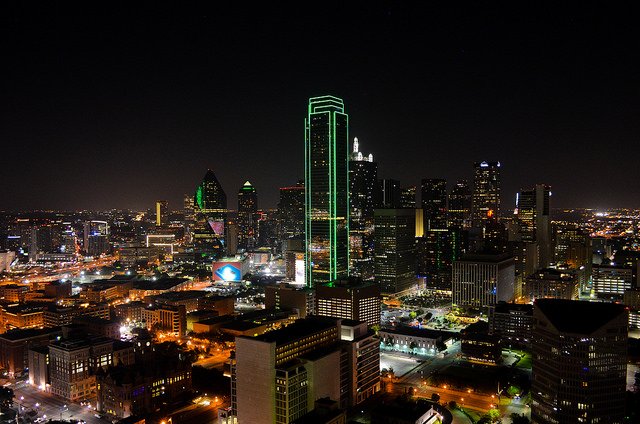 The characteristic green outline of the Bank of America tower.
Renaissance Tower is immediately behind it (Photo courtesy).

The Bank of America Plaza, at 72 stories and 921 feet tall, surpassed Renaissance Tower as the city’s tallest structure when it was opened in 1985. It’s also one of the most noticeable buildings on the city skyline, thanks to the green argon tubes that frame the building’s exterior at night.

Shortly after the building opened, engineers noticed there were design flaws with the tubes. The wind that naturally blows against the skyscraper was vibrating the tubes and causing them to crack.

Engineers had planned to remove the tubes altogether, until a young girl led a campaign to keep the tubes on the building. Her campaign was successful, the lights were restored and Bank of America Plaza is now one of downtown Dallas’ most memorable landmarks.

High rise construction downtown ceased after the 1980s, and it took more than two decades for Dallas to build another.

The 42-story Museum Tower was completed in 2012 and houses luxury apartments. The city’s skyline is set to continue changing as five more high rises are also in construction: The Frost Tower, McKinney and Olive, 3700M, the Richards Group Building and the Hall Arts Plaza.