People are always on the lookout to save a few bucks.

Some just cut their cable and watch TV through Netflix. Some just use rabbit ears to get the same basic channels as the Baby Boomers did when they were kids.

But in some instances people take drastic measures – as in living in a cave. Yes, people do live in caves in 2014.

According to this story from How Stuff Works on cave dwellers, some choose to do so because it’s tradition while others do so out of necessity. Some do it for environmental reasons. Whatever the reason might be that people choose to live in caves, as the story notes, most were intentionally carved out of rock and very few are natural.

And this is done all over the world.

From the Middle East and China to Moab, Utah, there are modern day cave dwellers among us.

In the Mount Hebron region of the West Bank, as the story says, a large number of Palestinians live in a network of caves that their grandparents built 100 years ago. The story adds that the area has been claimed by Israeli settlers, and that the Israeli army has threatened to remove them from their caves.

In Southern Spain, the story says there’s a long tradition of cave dwellings. It’s here that the caves were dug out of hard clay. Near Granada, a network of ancient caves are inhabited by homeless people. What’s amazing is that many of these purpose-built caves have been renovated to include modern technology – air conditioning, electricity and running water, according to the story. The common trend for many Europeans is to own a refurbished cave house as either a vacation home or permanent residence. 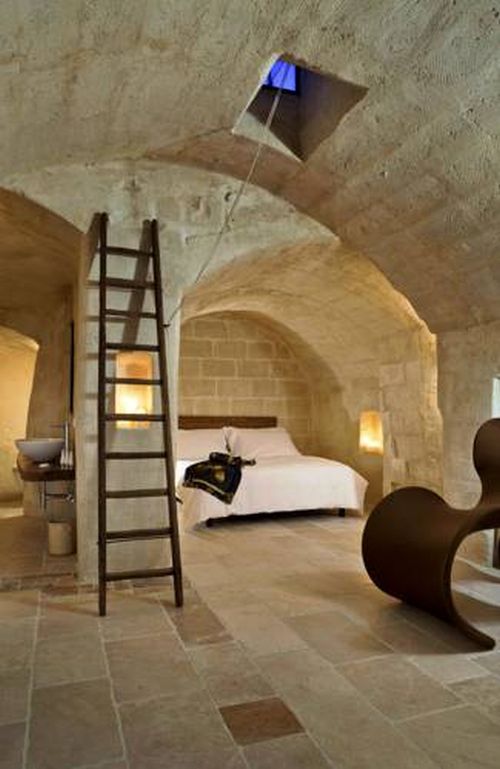 The story notes that this region in Turkey is known for an elaborate system of cave dwellings. The landscape is very harsh and has been compared to the moon. The natural caves provide shelter from wind and sandstorms amongst the absence of other buildings. But the rock has allowed for fabricated caves as well.

The history of this area is incredible.

As the story for How Stuff Works notes, in the early years of Christianity, anchorites (people who withdrew from society for religious reasons) chose to live here in order to avoid the distractions of the world. Then in the 7th and 8th centuries they became even more important when Arabs persecuted Christians in the region. The story says that the Cappadocian Christianity was forced underground where spectacular subterranean churches with arches mimicked the aboveground models. These churches eventually became entire cities.

With the right contractor, you can build homes into the side of hills or convert missile silos.

As the story notes, you can even build “underground” homes above ground. All you do is put earth on the sides and roof of your home. This is a practice that has been used in Europe for centuries.

Daniel Suelo lives in a cave in Utah.

As a story from Details says, unlike most Americans he doesn’t have credit card debt, a mortgage, nor is he fearful of downsizing at the office.

In fact, he has no debt.

Suelo has no money. That’s because in 2000, as the feature says, he stopped using money. Like some quit cigarettes, he quit money.

Suelo’s digs are located high in a canyon lined with waterfalls. It’s an hour by foot from Moab.

There, people think of him as either a modern prophet or a bum.

Suelo suggests he’s both too.

Suelo maintains his blog at the Moab Public Library.

As you would expect, some (most) think he’s crazy.

But for over 14 years, Suelo has lived without money or debt in his cave.

Don’t lie, you’re intrigued and wonder what it would be like.

According to Celeste Adams, people look to simplify their lives.

They also want to find a connection to the Earth.

One of the people Adams writes about said the prehistoric lifestyle made him see the world differently. He told her that it wasn’t necessary to live with much money since he discovered that he needed very little to survive.

His lifestyle is connected to the rising and setting of the sun. He enjoys the solitude and harmonious life he gets from cave dwelling.

Per Adams, his cave had a queen-sized bed under a hole in the cave wall that overlooked a valley. He constructed a wooden door at the entrance to the cave and a patio on the land above it.

As she notes, his cave did have a few modern conveniences like a self-contained toilet and shower. There are waterless toilets with composting capacities that need no plumbing, electricity, sewer or septic system.

By all accounts, it’s the “profound” connection to the Earth that gets people hooked.

Adams said she loves to spend time in caves since it’s “a way to separate myself from the world and enter a sacred space where I can sink deeply into myself and find my truest thoughts.”

It’s estimated that 25,000 people live in caves and rock dwellings in France.

There are reports of more than 40 million people in China who live in cave and pit dwellings.

No numbers are available for the amount of Americans who live in caves, but one could reason it’s a decent amount.

Aside from the connection to the Earth and the damage you potentially do, it offers people protection from Mother Nature – hurricanes, tornadoes and fires. Adams notes caves also offer relief from extreme ebbs and flows of temperatures.

They’re easy to move into and don’t require a great deal of effort to make them livable.

According to Bruce Silverberg, there are four main principles that are the core of the natural builder’s ethos:

Dangers of living in a cave

According to the How Stuff Works story, moisture is the biggest problem with cave houses. As it notes, proper drainage and ventilation can help. But if you live in an area prone to flooding, it’s not a good idea to live underground.

Another potential problem is light. When you live without light, it can make you depressed and it can have physiological effects. Experienced cave dwellers work around this by using clever light shafts. As the story points out, this is accomplished when the insides of shafts are coated with highly reflective materials, allowing maximum light to travel through them. In some instances, rooms far from the surface can receive natural light.

Are you up for it?

Now that you have the details, would you live in a cave?

Can you imagine that kind of change?

There’s no doubt it would save you money.